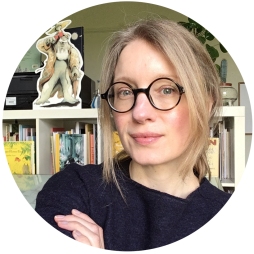 I love stories. I have always loved stories. However, it was a long time before I could see myself as a storyteller. I was born in York, in the North of England. My childhood was spent drawing and making things. I got in to writing later in life, on a master’s degree in Children’s Book Illustration at the Cambridge School of Art. It was there I discovered picture books to be the most wonderful way in which to tell stories.

After winning the 2013 Association of Illustrators New Talent Award in the Children’s Book category, my debut picture book, The Sea Tiger, was published by Templar in 2014. The Sea Tiger was nominated for the Kate Greenaway Medal and shortlisted for the Waterstones Children’s Book Prize. I have since written and illustrated Kings of the Castle, Pandora and Cloud Forest. In 2017, I was chosen to represent the UK in the Biennial of Illustration Bratislava.  My next book will be published by Frances Lincoln Children’s Books.